April 19, 2020
In these times of social distancing our monthly poker group wanted to find a way to meet virtually. Since we play many variations of poker (we've been meeting for about 25 years) we needed a solution that was flexible and also provides the interaction of a virtual BYOB happy hour. The solution we found will only work with a group that you trust and is based on the honor system. Don't consider this a competitor for PokerStars or another online casino. Here's what we tried this past Friday night that worked pretty well... (images blurred to protect the "innocent" 😉)

We used Whereby (Pro Plan - $10/month) for the video group call supporting up to 12 callers comfortably. They offer a free plan if you want to try it out with up to 4 people (bridge, hearts or spades would work well with 4). This solution is very convenient since it does not require an install and we wanted to minimize technical support issues with the group. 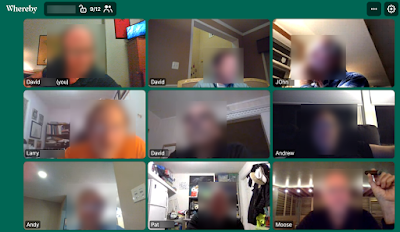 For the card table interaction we used playingcards.io. Currently, this is a free service that is a clever multi-user workspace designed for playing cards. There is no security and in fact no signup process. You can create a table yourself to try it out and simply send the link for the table you create to the group of players. Be aware that anyone with the link can join your game. A thank you to playingcards.io for making this service available and I hope it will continue (free or paid)!

Since we wanted to customize the table we chose the Other/Custom feature and created three custom decks to experiment with fake cash (quarters, $1, $5) in addition to the standard card deck. We found that the table editing features were easy enough to use that we were able to change the layout of the table during the game as players were present. 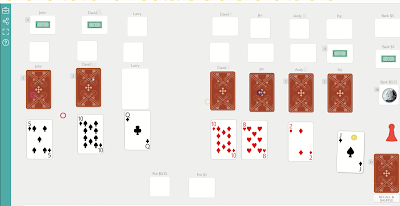 The solution of a group video call combined with the interactive card table was engaging enough that we played for four hours on Friday and we are willing to try it again. See the images below to get a feel for the complexity of the card games that we played. We did learn that having multiple denominations was too complex so we're going to simplify and try having only one chip type instead of fake money for betting. 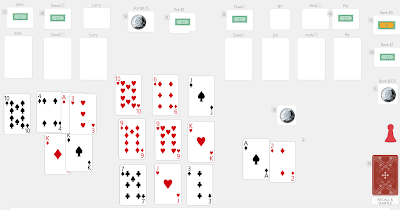 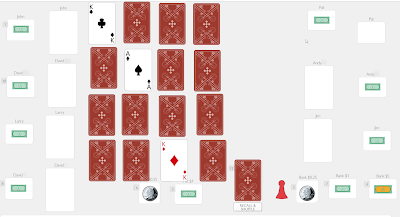